An “E. Bernhard Memorial Member of the Year” shall be chosen yearly. Nominations shall be made to the Secretary-Treasurer prior to July 31st for any member whose services and/or achievements merit such an award. The Executive Committee shall review each nominee’s services and/or achievements and shall select a “Member of the Year”. The award is to be presented at the National Convention during the club meeting or banquet. A plaque bearing the winner’s name shall be kept by HRBI with a token award presented to the winner. A resume of the winner’s service(s) and/or achievement(s) will be published in the newsletter and on the website. A member shall be eligible to win only once. 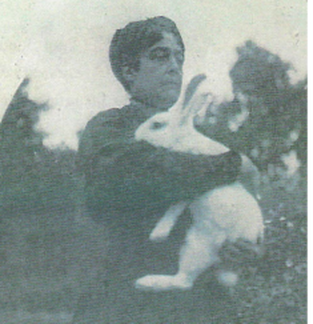 2022 Member of the Year - Kevin Rugen-Jackson from St. Louis, MO
Kevin joined HRBI in 2021. From day one Kevin assisted with the convention booth and was nominated to the secretary/treasurer position a few days later. He’s sorted out some of the things that had fallen by the
wayside while also promoting the breed by showing, sharing his knowledge with others, setting up
informational booths at shows and working with other breeders to coordinate a specialty at PASRBA. In
addition to his duties as secretary/treasurer, in the absence of a DR submission or newsletter writer,
Kevin has filled those roles until a permanent solution is found. In spite of all the wonderful things Kevin
has brought to the club, his biggest impact has been the impact he makes on the other breeders. Not
only does Kevin do things, he motivates other breeders as well.
~ Paraphrased from the nomination
2020 Member of the Year- Michael Brackett from Carver, MA
​​Mike has been a great asset to the club. He has stayed on top of handling everything related to sanctions. Mike often sends me helpful and appreciated reminders of upcoming events and tasks. He has volunteered an endless amount of his time and given numerous monetary donations to the HRBI, including offering his personally crafted carriers. I have thoroughly enjoyed working with Mike, he has made my job easier.
~ President Stacey Louis
2019 Member of the Year- Aurora West from Mayerthorpe Canada
Aurora spent countless hours developing an Hotot Guidebook, and on the HRBI website design and editing.  She also played a significant role in transitioning the club in the 2018/2019 year to be more functional and member friendly. She served on the board and show committee as well. Aurora took it upon herself to promote the Hotot breed at various shows in Canada and welcomed new breeders and members alike. She is a joy to work with and is a great asset to the HRBI!
​~ President Stacey Louis